Moving Beyond “Save The Whales”

An engaged and interdisciplinary approach to youth climate education

“This is the summer that feels like the end of summer as we have known it,” journalist Shawn Hubler wrote in a New York Times article earlier this year about the very real effects of climate change we are experiencing across the country right now.

More people are concerned about climate change than they were a decade ago. According to a March 2020 survey by Pew Research Center, six-in-ten Americans see it as a major threat to the country today — up from just 40 percent in 2013. But despite growing concern and mounting evidence that climate change is quickly threatening life as we know it, most people aren’t taking decisive action to address it.

She completed her master’s in community development at UC Davis in 2019 and began a Ph.D. program in Geography, focused on climate education. Neas wants to improve climate education so it’s more empowering and interdisciplinary. Her research is focused on education strategies to engage youth with climate change, giving them the tools to take collective action. In 2020, she and Professor Claire Napawan from the Department of Human Ecology in the College of Agricultural and Environmental Sciences received a Public Impact Research Initiative grant to support a project done in collaboration with The Sunrise Movement based in the Bay Area.

Below are excerpts of an interview with Neas (edited for length and clarity) talking about what brought her to UC Davis and why she conducts publicly engaged research.

What inspired you to pursue a graduate degree at UC Davis? What is your area of research and what about it interests you most?

Before graduate school I worked in education — mostly environmental education — for about a decade, and throughout that time I felt increasingly concerned about climate change, but also really bothered by what felt to me like a deafening silence in terms of talking to young folks about climate change. I just thought — gosh, I’m in environmental education, we should be at the forefront of preparing our students to combat this issue, and we are not. When I did see climate change being talked about in formal education, it felt really problematic. I heard educators talking to young people about the problems of climate change and the greenhouse gas effect, but then at the end telling them to ride a bike, take shorter showers, that ‘you can make a difference!’ It didn’t fit the scope of the problem. That felt personally uncomfortable to me and I didn’t feel comfortable teaching my students that.

Really I came to grad school with this question — how can we do better? In the face of this looming, oppressive crisis, how should we be educating our young people?

I ended up at UC Davis because of their community development program. I wanted somewhere that I could do engaged, practical work, and also something with an open curriculum so I could choose my own adventure. As for geography, it’s a really broad discipline, especially in the U.S., and we have some really fantastic faculty in geography [at UC Davis] who really value community-engaged work, which is the only type of work I was really interested in doing; I knew I would be supported by that department.

Can you talk about what you’ve been working on since you came to UC Davis? What is your Public Impact Research Initiative project exploring, and how does that tie into your other research?

For my master’s thesis, I did this fantastic project where I worked with two different school sites and we collaborated to build a climate engagement curriculum that I piloted and assessed. After doing that project, I felt like I had more questions than answers. This was fall 2018, which was a pretty big watershed moment for the youth climate movement. The Intergovernmental Panel on Climate Change report came out saying we have 12 years to substantially reduce carbon emissions or face runaway climate change. At the same time, the youth climate movement that had been bubbling just exploded. We also had another really brutal fire season which had an emotional toll on me and many people.

It was at this moment where I realized I wanted to learn more. I wasn't seeing the answers to the questions I was asking, and here are these incredible young people standing up to address climate change in a really powerful way. So instead of trying to invent the answer of how we should be educating them, really I thought, I’m just going to ask these young people ‘what supported you, or what do you need to address climate change?’

The question that drew me into the Ph.D. program was ‘what are the pathways youth are taking into climate change?’ I’m really interested in how this can support climate pedagogy; I want to build better climate education. What educational learning and experiences shape youths' engagement with climate change? One thing that is unique about the youth I’m working with is that they are framing climate change in a political way and taking collective action on this issue. That’s so different than what we’re teaching in schools. So what supports collective action on climate change?

The other part of my research is a little more theoretical and broad. The ways that I see young folks framing, understanding and acting on the issue of climate change seems vastly different to me than the last 30 years of environmentalism. We’ve been steeped in rhetoric around individual action, preserving nature for nature's sake — you know ‘save the whales’ — and a lot of young people I talk to aren’t interested in saving the whales, which I’ve learned is code for a more traditional framing of environmentalism.

What I hear them talking about is really a political, historical and justice-oriented framing of climate change, so part of my dissertation is mapping this major shift I see coming from the youth climate movement.

Through this project, I've been doing oral histories of climate activists in the Bay Area that are part of the Sunrise Movement, and core to the movement is storytelling. They use it as an engagement strategy; it helps people identify their own stories and shape a public narrative about their stake in climate change and why they're taking action. 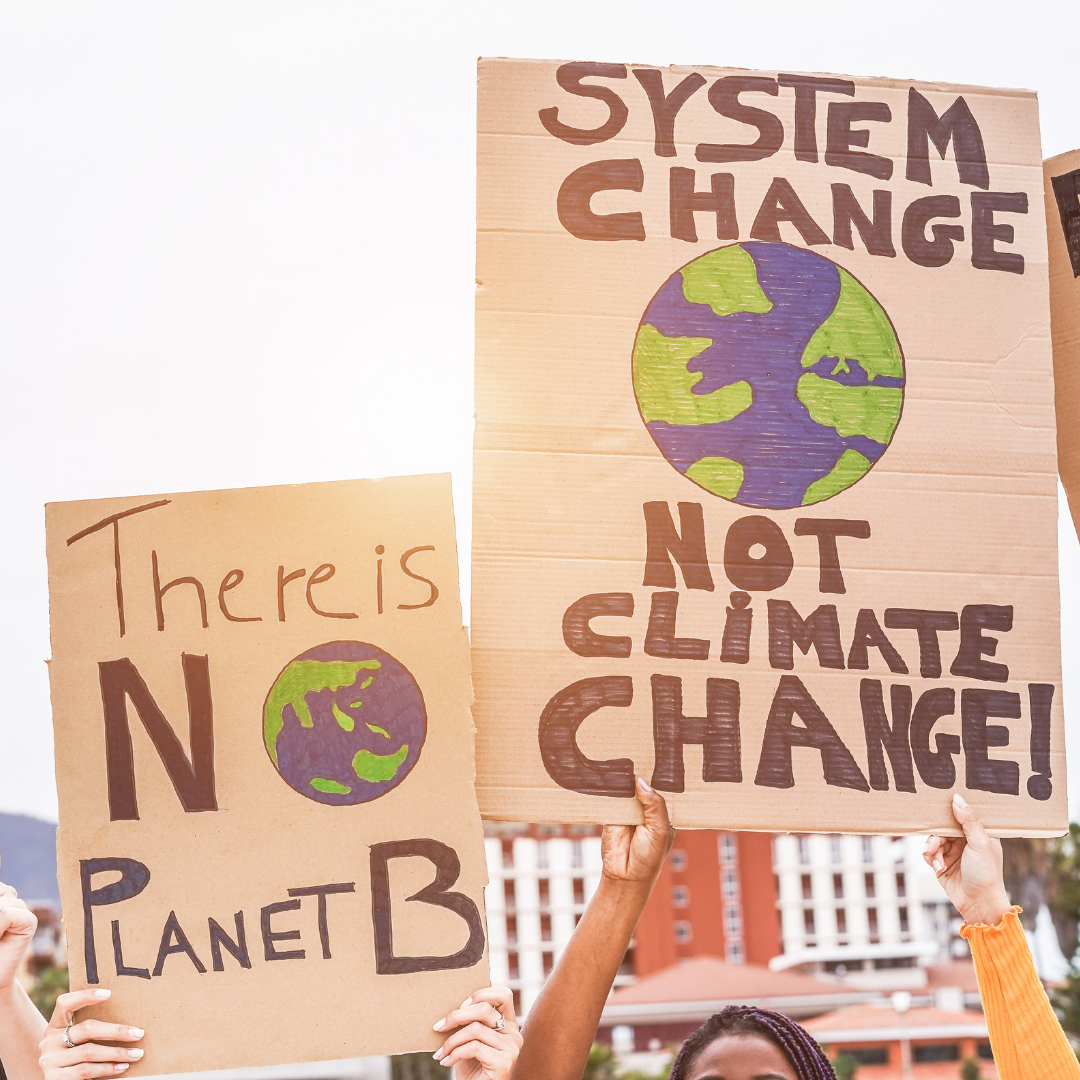 We Are The Ones We’ve Been Waiting For

The project is a collaboration with the Sunrise Movement, a diverse, youth-led coalition that uses direct action and civil disobedience to work for action on climate change. Its mission is to “build an army of young people to stop climate change and create millions of good jobs in the process” (Sunrise Movement, 2020). In addition to addressing effective climate communication, the project will yield resources to support this and other youth climate engagement organizations.

I pitched to them — let me do these oral histories with you, I'll use them for my research purposes and here’s an opportunity to produce media out of them, so we’re working on a series of short, pithy videos — ‘here’s this person, here’s why they're fighting for climate justice and here’s their vision’ — that will be used by them for training, social media, etc.

On one end, I came in with certain research questions but I also brought together a board of advisors from the youth activists I was working with and asked them what their questions were, what feedback they had for me, how they wanted me to ask these questions, so we co-designed our research questions and built this project together.

What does public scholarship mean to you?

I thought about this, and I don’t know if I have a good definition. To me, public scholarship is a very broad term and there's a lot of different manifestations of it...But generally, I think of public scholarship as being a time that scholars work to produce research that is inherently and immediately beneficial to communities or to stakeholders. That happens across a spectrum — it could be the co-designed process I went through, but it could be someone doing research they know is relevant to a community, and they think of ways they can publicly share their findings in a way that’s accessible, and I think that’s really important too.

What are some of the most rewarding and most challenging aspects of conducting publicly engaged research? 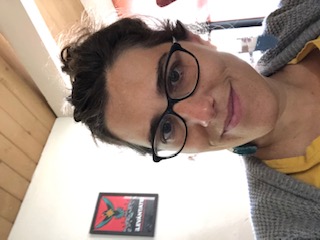 It’s a lot more work. Like...a lot. It would be much easier to write a paper than to do this massive project. But it’s a blast and I’m really privileged to be able to do it. I would not be interested in research that would only live in scholarly journals. That’s important, but I want to know my research is moving beyond that. I’ve designed my project so that I’m making changes on the issue I feel concerned about. It’s great to know that information can have power.

I came to graduate school because I was concerned about this issue [climate change]. There are a lot of ways to make change in this world, and for me this was the way to do it — to use the resources and power that I have as a grad student to learn about this issue and make change on it, consecutively. Kind of eschewing that model where you spend all this time researching something and then you write a paper on it and then hope it makes change — those things have been happening consecutively for me because what motivated me to be a grad student was a desire to make change. The opportunity for engaged scholarship was the sole reason I came to grad school.

What’s next for you?

I’m working with the [Sunrise Movement’s] podcast team to make an episode sharing my dissertation. Instead of being in an academic paper, it's a storytelling format — ‘here’s what’s going on in climate education, here’s what’s problematic. And from this project here’s what Sally discovered is really important and why.’

I also connected with the Wick Poetry Center out of Kent State University in Ohio, and I’m partnering with them to build a website to house the oral histories, and then we’re sharing digital engagement tools to help high school students make poems from the histories. We’re collaborating on a webinar for educators about teaching climate in English Language Arts, and there will be different activities for taking my research findings about climate change pedagogy and putting them into action.

Spreading Native Plant Seeds for the Future of Urban Landscapes

Life After School: Preparing Students for the Real World through Community-Based Research