The Art of the Op-Ed 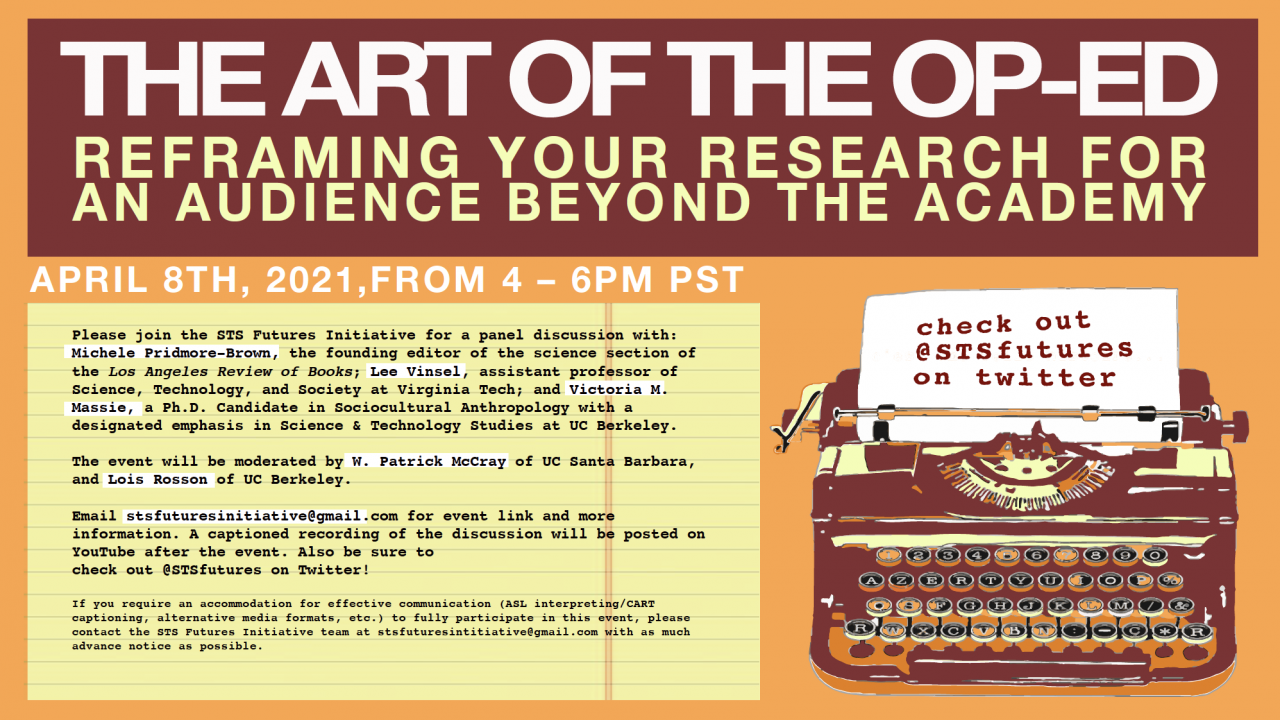 How to Reach Audiences Beyond the Academy

The process of cultivating academic scholarship can often feel siloed within the narrow confines of the ivory tower. Join the Science and Technology Studies Futures Initiative on April 8th to hear more about how you might retool your academic work into writing palatable for audiences beyond the academy. What does the timeline for publication in online magazines and periodicals look like? What are the features of a strong pitch? Who should you reach out to, and according to what guidelines? This panel aims to demystify the process of appearing in popular print for graduate students and early career scholars.

Please join us for a panel discussion with: Michele Pridmore-Brown, the founding editor of the science section of the Los Angeles Review of Books; Lee Vinsel, assistant professor of Science, Technology, and Society at Virginia Tech; and Victoria M. Massie, a Ph.D. Candidate in Sociocultural Anthropology with a designated emphasis in Science & Technology Studies at UC Berkeley.

Michele Pridmore-Brown is the founding editor of the science section of the Los Angeles Review of Books, and has been instrumental in orienting it towards STS topics. She herself also writes essays and reviews for both popular and scholarly publications. Currently, she is a Research Fellow with the Center for Medicine, Science, Technology and Society at U.C. Berkeley.

Lee Vinsel is a co-director of The Maintainers, a global, interdisciplinary research network focused on maintenance, repair, and the mundane work that keeps our world going. He is the author of Moving Violations, a history of automobile regulation in the United States, and co-author with Andy Russell of The Innovation Delusion: How Our Obsession with the New Disrupts the Work that Matters Most. His work has appeared or been covered in The New York Times, Guardian, Atlantic, Le Monde, and many other outlets around the world.

Victoria M. Massie is a Ph.D. Candidate in Sociocultural Anthropology with a designated emphasis in Science & Technology Studies at UC Berkeley. Her dissertation, "Sovereignty in Return: Building Utopia through Genetic Reconnection in Cameroon" examines how postcolonial sovereignty is being transformed through the return of the genetic Cameroonian diaspora through genetic ancestry information. Massie has explored her interest in racial justice, scientific authority, and pop culture as a journalist and creative nonfiction writer. Her work has appeared in Vox and The Intercept, as well as in several academic journals.

The event will be moderated by W. Patrick McCray of UC Santa Barbara, and Lois Rosson of UC Berkeley.

Email stsfuturesinitiative@gmail.com for event link and more information.
A captioned recording of the discussion will be posted on YouTube after the event.
Also be sure to check out @STSfutures on Twitter!

From Red Power to Wallmapu Libre and Land Back