A Different Kind of Block Party

Block Party reimagines the architecture and urbanism of a section of Berkeley, California, through the perspectives of disability and housing justice. Created by a multidisciplinary team composed of disabled and non-disabled architects, artists, and authors, the project seeks to answer two important questions:

To explore the architecture and design of this community, two professors from UC Davis, Brett Snyder and Javier Arbona have partnered with David Gissen from the New School in New York and Irene Cheng from California College of the Arts to assemble a unique interdisciplinary team. With prominent disabled voices leading our group, we believe that our project lives up to the mantra “nothing about us without us.”

Reset: Towards a New Commons

“Contemporary American society has become increasingly fragmented, with people separated both physically and socially based on ability, age, income, and belief. This fragmentation is built into the urban fabric of cities, suburbs, and rural areas, which wittingly and unwittingly isolate certain groups from larger communities through the design of spaces according to specific needs. A host of colliding crises, including the COVID-19 pandemic, embedded structural racism, and deepening political polarization, have only exacerbated these divisions.”

Reset: Towards a New Commons considers how spaces may be designed for all, addressing the need for barrier-free environments and practices rooted in Universal Design. The exhibition explores how architecture can address Universal Design while helping to create communities that foster inclusion, cooperation, and mutual assistance in the broadest of terms. It was developed over almost a year, through support from the UC Davis Public Scholarship and Engagement, which gave us time to devote to a variety of efforts that culminated in audio interviews, drawings, and models.

Berkeley, a Center for Disability Justice

The reason we, as a team, chose Berkeley as the location for this project is because it’s one of the birthplaces of independent living. It’s also the birthplace of single-family zoning and some of the first places in the country that addressed the disparities around home ownership among various groups of people and why single family housing was distributed in certain ways became clear.

The challenge our team was trying to address was,  how do you develop a critique of property and land settlement through the lens of both disability and race in these areas. Our proposal was built on a series of questions that we asked both internally as a team, as well as through interviews with community stakeholders.

While many of my own past projects have involved novel methods for participation, this project took a more traditional approach of stakeholder interviews. Following the public scholarship model, it was important for those with disabilities to lead the conversation. In doing so, we create materials that are more accurate and authentic to the needs of our community and can be used in design proposal submissions and for continuing the conversation.

Part of this process, led by David Gissen, included creating a tactile model for one of the team members Georgina Kleege, a leading voice in the disability rights movement and resident of Berkeley who is blind herself. This tactile model enabled conversations about some of the urban strategies. The model included raised portions to show how a new path could use setbacks to create a new zone that would act as a shortcut for moving through a city block, which we referred to as a team as the “meander” path.

The exhibition will be on view at the Center for Architecture, New York from April 14 - September 3, 2022 for more information.

Reset: Towards a New Commons has been co-curated by Barry Bergdoll, Meyer Schapiro Professor of Art History and Archaeology, Columbia University, and Juliana Barton, independent historian and curator. 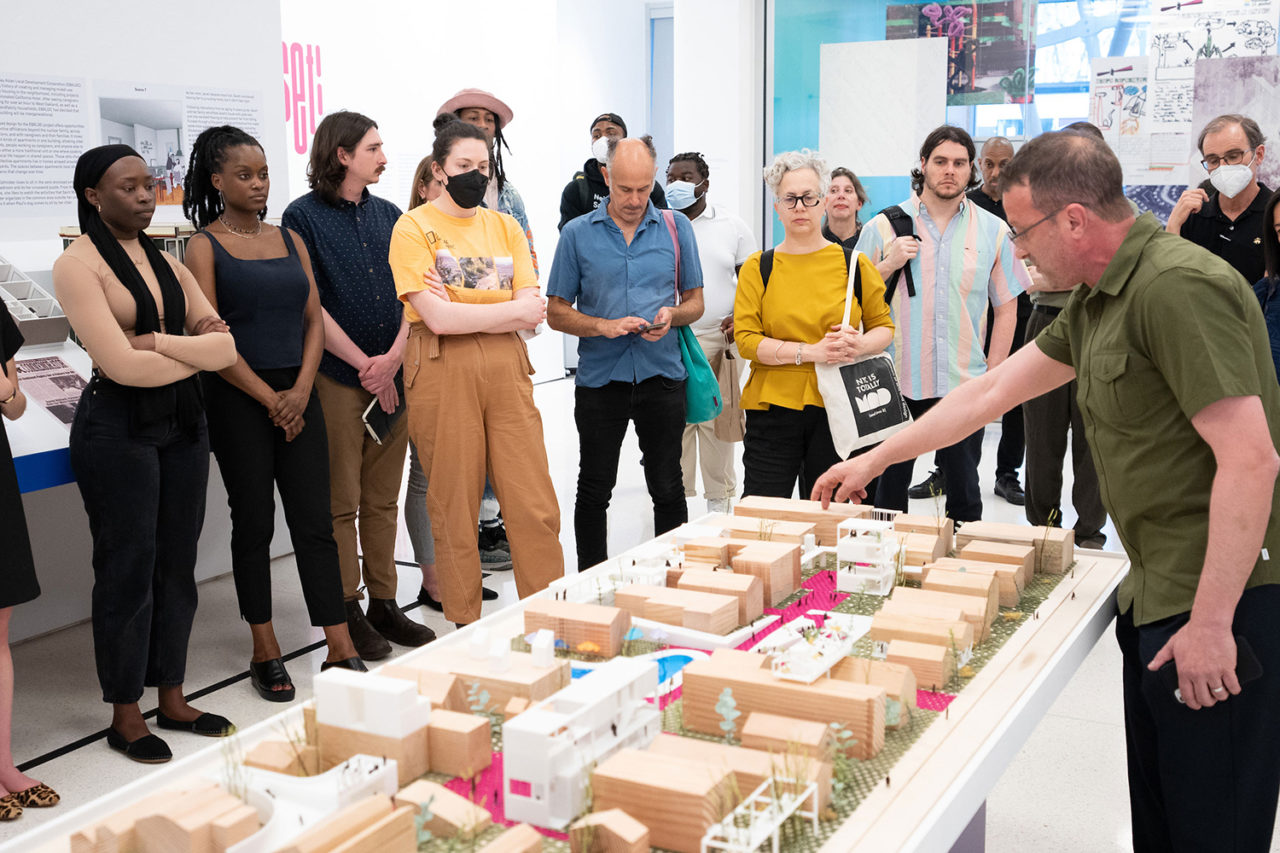 Reset: Towards a New Commons

Hundreds of visitors attended the opening of Reset: Towards a New Commons on April 14, 2022. The exhibition will be available for view through September 3, 2022.